December 01, 2011
The bad news: My NXT brick was not working properly when I took it from the box. The sensor port 2 was not working. I do not think that there is warranty coverage for Lego Mindstorms in Brazil. I had no better option than try to fix it.

The good news: Lego delivers all information about the NXT electronics and its embedded software. It is a true open source platform.

I've downloaded the schematics from:
http://mindstorms.lego.com/en-us/support/files/default.aspx

And I've noticed a missing component near the port 2. R59 was not there. For lucky it is a common 1k resistor. Thanks to my father's SMD lab, we were able to solder a new resistor, and push hot air over port 2 components. After that port 2 started to work.

I'm deeply happy with Lego's open source policy for this product. I was wondering how happy I'll be when my car becomes open source. Lego gave us the power to fix the problem without any limitation. It is clear to me now that open source is great for hardware too. Is there open source tendencies for industry? 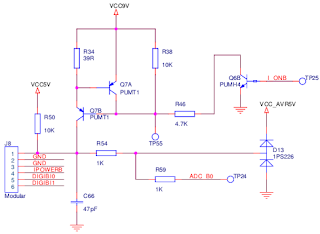 R59 was not there when I've opened my NXT for the first time. The schematics is from Lego web site.

Lego has supported the development of a remote control to the NXT that runs on Android. The source code is released under GPL3.

About my non-working brick, I'm quite sure that this kind of problem happens very few times. Lego Mindstorms NXT 2.0 is clearly a high quality product. I believe that I'm the only in many many many owners who had this kind of trouble. And I admit: It was fun to fix it! :-D