Showing posts from 2013
Show all

October 20, 2013
I made a fork of a clone detection tool named CCFinderX . Two days ago I got a message from an user telling that the compilation was not working on Arch Linux. As some Kernel developers, such as Greg KH, has mentioned Arch Linux as being nice , I decided to try it. I prefer chroots over virtual machines due higher performance, and due the fact that I do not need insulation between my chroots. As for Debian, Fedora provides all tools needed to create chroots for Arch Linux. This is "very" nice, as one can setup the Arch Linux chroot in just a few minutes. The steps will cover installing Arch Linux tools on Fedora, creating the Arch Linux chroot, and configuring it with a new user and ssh server. Some data: Target directory for the chroot: /opt/arch Package groups to be installed: base base-devel (More groups available here ) User: peter ssh server port of the chroot: 2227 Note that the text refers to "[fedora] $" and "[arch] $", but this strings
Post a Comment
Read more

August 17, 2013
Toshiba R830-10P  is a nice notebook as it lightweight, and very powerful, but the Graphics are poor. The integrated LCD has miserable resolution of 1366 x 768, and as it uses Intel HD Graphics 3000 it do not officially support high resolution displays such as 2560 x 1440. See the problems I've faced to use high-res monitor here . I made a script to help people with similar problem. If you have a monitor that is not officially supported by your video card, you can try this approach. You need to tune the Hz parameter to find one value that is supported by the hardware, that is comfortable and stable. For comfort the higher the Hz the best. Please note that there is no warranty that this script works for you, and there is no warranty that this script is safe for your hardware. I'm quite sure that playing with Modelines can burn some old CRT monitors. I've never heard that you can burn LCD / LED monitors, but I'm not sure. The script is available at: https://git
Post a Comment
Read more 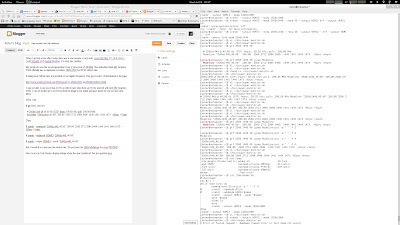 July 23, 2013
Finding code clones is far from trivial. For a nice explanation about the challenges of finding clones in source code, I suggest reading: " Comparison and evaluation of code clone detection techniques and tools: a qualitative approach ". You can start by reading sections 2 and 6. There are at least two tools with source code available under permissive free software licenses. Deckard and CCFinderX . CCFinderX is an evolution of CCFinder, made by the same author. Deckard is easy to build and test, however CCFinder was not. For Linux users, I made a fork from gpoo/ccfinderx , and made some changes to simplify the build on Linux. The main change is to separate the core from the GUI. I have now two repositories: https://github.com/petersenna/ccfinderx-core and https://github.com/petersenna/ccfinderx-gui Both are clones from  gpoo/ccfinderx , but I've spited things. At the moment the GUI do not work but you can build CCFinderX-core without wired OpenJDK dependencie
2 comments
Read more

June 14, 2013
I use Fedora 64 bits on my workstation but I need 32 bits chroot of Debian. It is easy to do. Create the chroot following the instructions from:  http://blog.parahard.com/2013/03/creating-debian-chroot-inside-fedora.html The first difference is that you need to add --arch=i386 to the debootstrap command. Then for entering the chroot add linux32 as the first argument after sudo. Something like: $ sudo linux32 chroot debian-wheezy After that even uname -a will show 32 bits instead of 64. The linux32 tool is on the util-linux Fedora package.
Post a Comment
Read more

March 27, 2013
I use Fedora on the Desktop but I need to do some development on Debian. chroots gives you no performance overhead, while virtual machines gives you CPU and memory insulation. Also the chroot is only a directory on my development tree. I'm using Fedora 17 on my workstation and Debian 7 inside the chroot. The debootstrap command will save the files on the directory debian7-chroot/ under the current directory. 1 - Install debootstrap and dpkg on Fedora: Fedora # yum install debootstrap dpkg 2 - Create the basic Debian: Fedora # debootstrap wheezy debian7-chroot/ http://ftp.fr.debian.org/debian 3 - Enter your new Debian: Fedora # chroot /path/to/destdir 4 - Install additional useful packages: debian-chroot: # apt-get install locales less vim openssh-server sudo aptitude 5 - Configure openssh server to start server on port 2222: debian-chroot: # vi /etc/ssh/sshd_config Chage: Port 22 To: Port 2222 6 - Change root password debian-chroot: # passwd 7 - Return t
Post a Comment
Read more

The datasheet of Toshiba R830-10P mentions that the maximum memory capacity is 8GB. See it  here . But Intel says that the i7-2620M supports up to 16GB of RAM. See it here . I have asked for help on Toshiba Forums. Nothing useful from there. See it here . I was curious as I have a very particular need for 16GB of RAM. Today I decided to give it a try. I bought two Patriot PSD38G13332S (8GB PC3 - 10600 1333MHz CL9 SoDimm) and installed it on the notebook. It just worked. So if you have the need for 16GB of RAM and a similar notebook from Toshiba, you can install 16GB of RAM.
9 comments
Read more
More posts